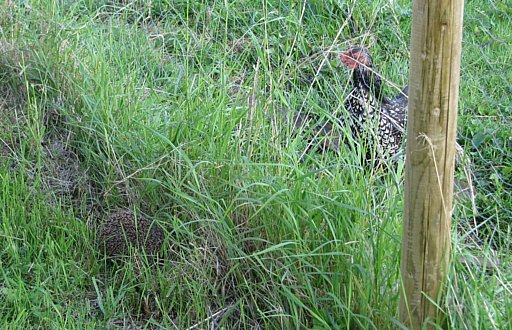 I think people underestimate how much goes through the minds of chickens. No, I’m not saying they’re geniuses, but they’re not as daft as people sometimes assume. They vary a lot – some really are COMPLETELY daft.

But curiosity is an indication that there’s something going on in there. We had quite a lot of chickens for a few years, and I’ve also watched my (Indian) in-laws’ chickens quite a bit. I remember in particular these occasions:

Several chickens watching a hedgehog scurrying through the grass just the other side of their fence, and following it with their heads, then, following it bodily.

Most of the chickens looking up when a flock of geese flew over. They didn’t look up until the geese started honking.

Mother hen looking after several small chicks pecking at seeds and insects on a fairly barren bit of soil outside my in-laws’ house. Cockerel strutting about fifty metres away, suddenly comes charging at the little group at a huge speed, just in time to engage with a diving pariah kite – which extracts itself rapidly and flies off empty handed. (Empty beaked? Clawed?) Successful mission. I’ve only seen this once, but apparently it’s fairly frequent.