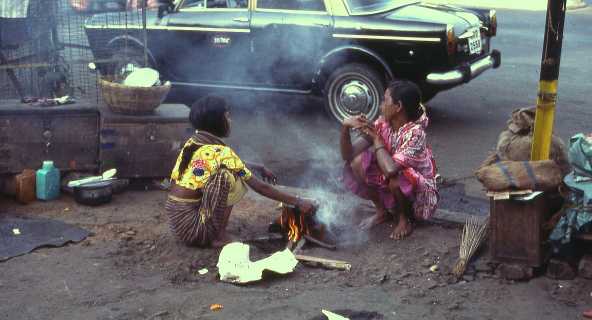 After I’d taken this photograph, I tried to ask in mime (I knew no Marathi, and not much Hindi at that time) whether they minded. The lady on the right laughed, and addressed me in excellent English, asking me if I spoke English.

We had a conversation while they breakfasted, and then they had to get changed to go to work. They took turns to hold a triangular cloth screen out from the post for each other to change inside, and emerged like butterflies from chrysalises – immaculately dressed in beautiful saris.

They both worked as English language secretaries in an import-export business. Yet they were living on the pavement, with all their worldly possessions locked in those two scruffy trunks all day while they were at work.

They were lucky: the sarpanch (village headman, roughly speaking) of the village they came from had lent them the money to pay for their training, and they were expecting to have to work for five or six years to save enough money to pay him back and pay for their own marriages back in their village. They said they could afford to live in some horrible little room (their description) and knew that they’d have to when the monsoon arrived, but in the meantime they preferred to save more money. A friend of theirs didn’t have room for them, but had lent them her address; their employer didn’t know they were living on the street.

One of the things that impressed me greatly was their openness with a complete stranger – they’d obviously very quickly assessed that I was okay. Absolutely not what I’d been led to expect of women in India – at that time I was only just beginning to realize how wildly wrong the stereotypes so often are.

I don’t think they’d want recognizable pics of themselves up – but they’re safe from their employer finding out about them living on the street by now, I’m pretty sure! If they by some extraordinary chance should see this, I’m sure they’d have a hearty laugh. Their friend with the room might recognize them, too, and they wouldn’t mind that; and I’d be very surprised if their employer would recognize them, and either they’ve got their feet very well under the table by now, or more likely, they left Bombay over twenty years ago.

Did they experience sexual harassment, either at work or on the street? They didn’t mention it, but they wouldn’t have mentioned it to me even if they did, I’m sure. Nor did I enquire whether they had to pay the local police for not moving them on, or pay the police or anyone else for “protection”.

I’m sure that most of the young ladies in jobs like that come from middle-class city families, not mission-school educated village families, and wouldn’t dream of living on the street like that. I’d love to know what’s happened to these two over the last thirty years. Did they go back to their village and get married? Or have they stayed in the big city, perhaps settled down there? I’ve no idea. They certainly intended to go back to their village when I met them.

Not everybody living on the pavement is so lucky, of course. I didn’t speak to the people in the next picture, but I’d be surprised if their story was as happy. 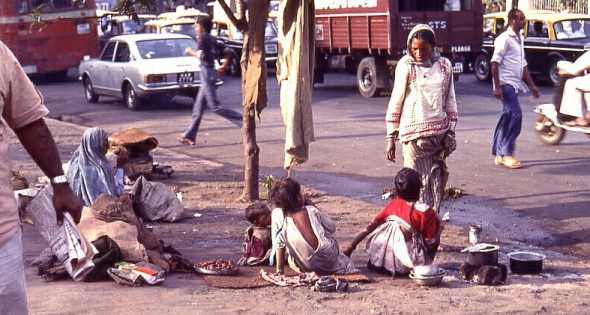