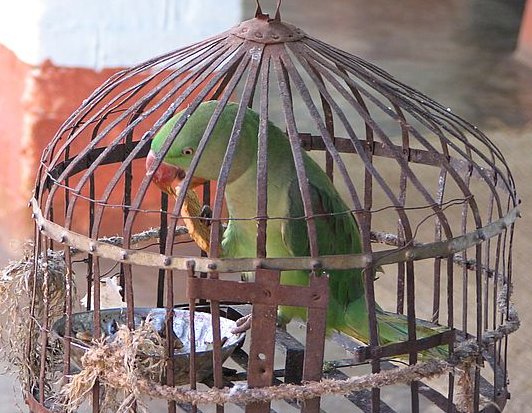 Roopoo was my sister-in-law’s parrot. Roopoo is a name for a parrot in Hindi in much the way Pussy is the name for a cat in English.

He was very dextrous, standing on one leg and using the other claw as a hand (complete with opposable thumb) very expertly. He did drop bits of biscuit occasionally, but most of it ended up inside him.

He was probably the only parrot in India who could whistle Für Élise. He might even have been the only one in the world, who knows? Sometimes he got it right (or the same as my version, anyway) all the way through; sometimes he made interesting little variations of his own. He and I could whistle it as a duet, and his variations almost always harmonized perfectly.

He also addressed the children correctly by name, and crooned his own name when he was alone (as well as practising his tunes) – you could hear him from the next room.

And before anyone gets sniffy, no, I wouldn’t keep a parrot in a tiny cage like that myself. But then, wherever one goes there are things going on that one wouldn’t do oneself, many of them a great deal worse than that.

And of course anyone from anywhere else in the world who visits you or me in our native environment will find things going on that they wouldn’t do themselves, that we don’t generally even think about.

One doesn’t set the world to rights by upsetting one’s hosts wherever one goes.

Actually, Roopoo seemed quite content with his lot. He loved human attention, and got it by the bucketload.