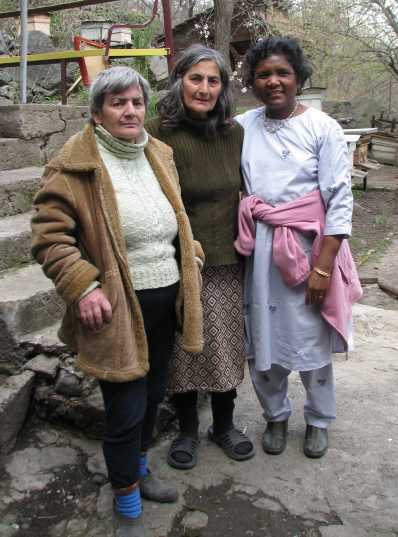 We met them high in the woods on the side of the valley. Three old women collecting big bundles of firewood. I say old; two of them might be very little older than we are, but they seemed old. The third really was old, I’m sure.

We’d gone to look at the ruins of an old monastery. There are substantial trees growing through its roof and walls, but quite a lot of it is still standing – and the people of the village below it have started to restore it. Beautifully.

Many old monasteries in Armenia are being, or have been, restored – mostly by professionals, under schemes supported by American charities, organized by rich Americans of Armenian origin. The people of this village didn’t want that. They didn’t want all the attached strings, and they wanted to use the traditional building techniques. They know that the traditional construction is good for a few hundred years, even through earthquakes. They’re suspicious of reinforced concrete with thin stone cladding, which looks good when it’s new but looks dreadful after a few decades, when the cladding starts to fall off and the concrete spalls off in chunks, showing the rusting reinforcement. Even when it’s new you can see it’s just cladding if you look at the corners.

We were just about to walk back down through the woods to our car. I was taking some photographs of the valley from a wonderful vantage point on the top of a sheer drop at the side of the monastery. One of the old women called from the woods below us. It took me a few moments to locate the source of the voice.

I couldn’t understand what she was saying at all. I waved. She waved back, and then quite clearly beckoned to us, and gestured, showing the route we should take to get down to where she was. We followed her instructions and were soon beside them. Three old women with big bundles of firewood.

We don’t know a word of Armenian – well, maybe three or four that we picked up while we were there, but not enough to hold a conversation. But I do have a little Russian, and they were perfectly at ease speaking Russian. But I really do only have a little, so our conversation proceeded mostly by gestures and nods and facial expressions.

They were about to set off back to the village with their bundles. I picked up the oldest lady’s bundle to carry it for her. She tried to protest, joking that I was stealing her firewood, but her smile gave her gratitude away. Neither of the other two would let Grace take their bundles, indicating that the path was difficult, that they knew it, and that Grace didn’t. Besides, they were both probably stronger than Grace, who hasn’t carried a bundle of firewood since her early teens.

We walked back down to the village in silence – well, without speech, but not without the sounds of our footfalls, the wind in the leaves, birdsong, and the noise of the stream nearby. Once or twice we heard the noise of vehicles on the road at the bottom of the valley, but only once or twice.

Then they insisted we visit them at Anahit’s house – an ancient, ramshackle wooden building that had seen the beginning and the end of the Soviet Union, but scarcely noticed either. The whole village was like that. Twisted a little when the hillside under it shifted during an earthquake or two, but the tree roots amongst the boulders had held the hillside together, and none of the wooden houses had actually collapsed. 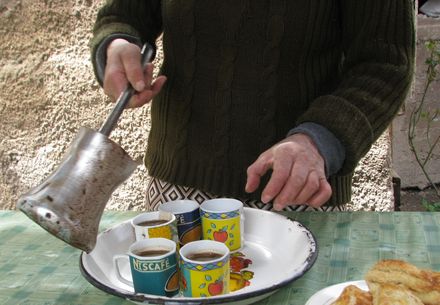 Anahit (we never did manage to catch the names of the other two) made soorch – strong Armenian coffee in tiny cups – and produced some sweet little cakes. We chatted as best we could, with lots of laughter. And finally we parted, after big hugs and group photos, laughing and calling Grace and Anahit and one of the others – the oldest lady had by this time gone home – Три сестры, tri sestri, ‘the three sisters’. Two Armenians and one Adivasi.

Adivasi? And proud of it too. My wife, Grace. That’s another story.