A Mad Cyclist & A Scar 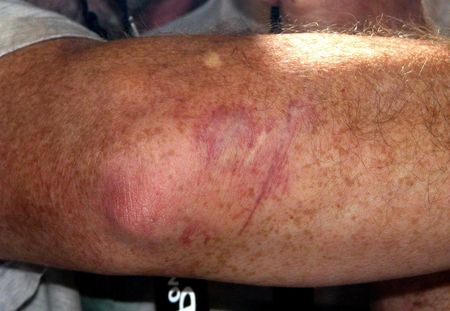 My own left elbow. This is a scar from an accident nearly thirty years ago.

There’s a bit of a story about the accident. I was a mad cyclist, riding pretty fast on a typical Indian bike on typical rough Indian roads (I feel an essay coming on about Indian bikes and roads). Everyone in the area knew I was the mad cyclist.

There’s a place where the road fords a small river (impassable in the monsoon, but easily forded for the rest of the year). The bottom is sandy, and it’s hard going on a bike. Most people get off and walk through there, but I used to take a run at it, down the steep descent into the ravine the river runs in, so that I was going fast enough to make it across before I ran out of momentum, and still going fast enough the other side to get up out of the ravine again without getting off. It was a regular route, I knew every rut and pothole in the so-called road.

That day I went to the market, did the shopping, and was coming home again with a bag hanging on my handlebars. Whoosh down the slope into the ravine.

Too late I saw that there was a pile of broken bricks lying under the water in the middle of the ford, where they’d obviously bounced out of the back of a truck...

I managed to keep the shopping out of the water – I probably shouldn’t have tried. My elbow connected with the bricks. My sturdy Indian bike was unhurt.

I cycled the rest of the way home pouring blood, and was patched up with hot turmeric paste (natural antiseptic) and a large leaf for a bandage. Clearly a good job – I don’t think the scar would have been any less with modern medical treatment, in fact I’d probably have contracted MRSA in the casualty department.

Oh, and in case you think I can’t tell my left from my right, I took the photograph in a mirror.

©Clive K Semmens 2008. (This appears, with minor differences & no picture, as Penny’s words in The Reminiscences of Penny Lane, my first published novel.)