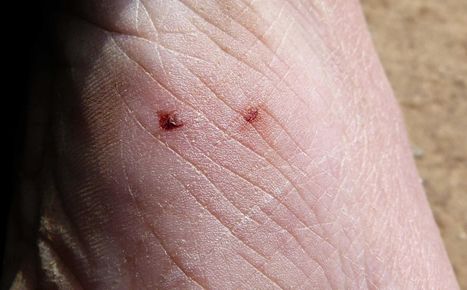 The house has a million rats (and mice). Majali was chasing a rat with a stick (I’d never seen a rat with a stick before) and it ran right by me, so I stamped on it. Stamping on a rat is a bit like stamping on a small pile of banana skins. I lost my balance, and fell over backwards – luckily onto a bundle of clothes, so I wasn’t hurt. I got up. The rat was still alive, but badly injured. It was trying to run, but it was very slow (by ratty standards), so I caught up with it and stamped on it again – a bit less impulsively and more carefully: I didn’t fall over again. A bit of squelching about killed the rat, but not before it had managed to squirm round and sink its teeth into the side of my besandalled foot. I got two deep puncture wounds 10mm apart.

I have no photo of the dead rat. It was cleared away while I was too busy cleaning the wounds and making them bleed as much as I could. I took the photo of the wounds the next day.*

Later, we were chasing a mouse with sticks (not that old joke again...) and the occasion arose when the most effective move was to stamp on it. I’d vowed never to try stamping on a rat wearing sandals (aaaarrrrghhhh!) again, but a mouse? The mouse didn’t survive, and I didn’t get bitten this time.

Dada decided it was time to get a cat, and the first effect was that the rats and mice seemed to go into hiding. The cat (barely out of kittenhood, really) prowled around, sniffing in all the right places.

But which is worse? An infestation of rodents, or a cat? Every time anyone was eating anything, it wanted some; and you couldn’t leave food unattended for a moment or it would be into it. So it got shut in an almost abandoned part of the house whenever food was being prepared or eaten. Oh, the yowling! It eventually found a way out. (You can see a video of it finding its way out: Jump? No! Too far!)

Then at night, it tried to get into bed with us, so we shut the bedroom door. And trapped a bat in the bedroom.

Did I mention that the house also has a million bats? From my point of view, that’s okay – a little disconcerting when they fly within millimetres of your face, possibly between your face and the plate of food on your lap, but utterly harmless. In fact, quite beneficial: the house is completely mosquito-free, and that’s largely thanks to the resident bats.

But even I find the demented flapping of a bat that’s trying to find its way out of a room which it knows has no exit a bit much when I’m trying to sleep, so I opened the door again. Exit bat, immediately. It knew I’d opened the door.

I’m pretty sure it knew I’d opened the door for it – I suspect that it knew exactly what it was doing before, when it repeatedly buzzed my ear, chirping madly just as it passed. (Yes, bats do chirp, audibly. I don’t doubt they chirp ultrasonically too, but that doesn’t mean you can’t hear the lower end of their vocal range.)

But the rest of the family think bats are pests – not as bad as rats or mice, but vermin anyway. They kill them when the chance arises. This variety is certainly not endangered – there must be billions (literally) of them in India.

And the cat did eventually kill (and eat) quite a lot of mice, and a few rats. It still expects us to give it a bit of whatever we’re eating – but it never offers us any bits of rat or mouse – unlike some pet cats I’ve known in England.

* I’ve experienced pains a lot worse!
I’m sure that the risks of disease from a bite like this – while not completely negligible – are very much overhyped in “western” thinking. If you make it bleed plenty, and keep the wound clean, the odds of getting anything nasty are pretty small, as long as your immune system is in good shape. One takes bigger risks all the time without thinking about them – it’s just a matter of which particular risks one has got used to, and got blasé about.